If increasing sales was easy, unicorns would be doing it 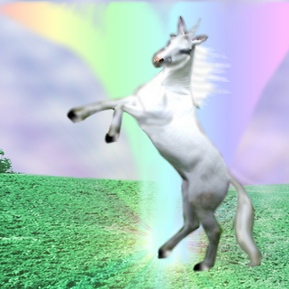 Is an easy way to increase sales a myth? (Unicorn by scorpiorules58, on Flickr)

Maybe conversation is overrated. Which is a strange idea in this social media era. Tools are constantly evolving to let us talk with another.

And there are a lot of sales reps who make their money because of their ability to talk with prospects and customers.

So advice on using social media as engagement and conversational tools in a post about easy ways to increase sales sounds reasonable. But this tip just doesn’t work:

3. Engage instead of broadcast

When I get an alert that someone is following me on Twitter, I always check out their stream first to see if they are engaging with their followers. I look for retweets, mentions of other users, replies to other users, etc. If a person or company is just using Twitter as a broadcasting tool—especially to promote themselves, their product or their service—then forget it. I don’t follow them back! If I wanted to have commercials forced on me, I would watch live television.

This is a sighting of Dan Zarrella’s  unicorns and rainbows. There’s no proof that Twitter as a broadcasting tool is a bad way to go. Or that engaging and retweeting will increase sales. That’s one blogger’s opinion. Probably a few more agree. That’s fine. If it works for you, then stick with it. Just don’t declare it the only way to use Twitter.

And Dan has found that this easy tip doesn’t hold up:

What matters is value. Does your social media content add value? Whether it’s non-engaging content or conversational, it needs to have value to followers. They will forgive broadcasting if they learn something.

Also, engagement is not easy. It takes time and effort. And it doesn’t guarantee sales. It’s far from the easy solution suggested here.

Yes, it’s a good idea. But it’s not as magical as an unicorn dancing on a rainbow.

Previous post: Writing rules: Why it’s not wrong to ignore them

Next post: Marketing doesn’t have to get in the way of social media