Local news on Facebook is only important if it generates revenue 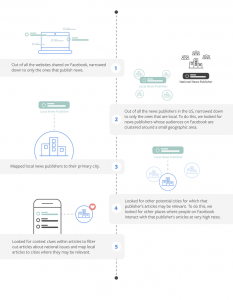 So I’m relying on Christine Schmidt’s analysis of Today In on Nieman Lab. She seems surprised that it focuses mostly on crime and car crashes. In other words, mayhem.

I’m not shocked. This is the kind of content that attracts engagement on Facebook generally. “It’s often an angry, reactive place where people go to get worked up and to get scared,” Laura Hazard Owen writes. So that’s what is going to be curated.

Consider that local stories for Today In needs to reach some sort of critical mass for Facebook to even generate a page. If there aren’t enough local stories, then the more-is-better Today In algorithm won’t work. It’s going to target the high engagement stories because that’s what Facebook does.

Which is a sign that Today In is a failure. These criteria ensure only high population densities get Today In coverage.

Facebook always had a bias toward the heavy hitters — the publishers and celebrities who had large followings. The algorithmic threshold for Today In meant that Facebook was only interested in places that generated a lot of content.

It’s a business decision. Only deploy resources to the content that gets a certain amount of engagement. It’s not so much about curating local news but harvesting ad revenue that won’t go to the local news publishers who can’t scale enough traffic.

So I don’t have high hopes for the planned News tab on Facebook. I expect more of the same focus on high-traffic opportunities. Which is what a business needs to do. Just don’t expect something noble.

Previous post: Is there hope for reader comments on newspaper sites?